To anyone who is on the fence about trying this out, I say Duc in altum!

Almost nine years ago, I sweated over buying plane tickets. Should I pay extra for the ability to cancel? I was considering traveling halfway across the country for a conference called Veterum sapientia. If I went, it would be my first time at a spoken-Latin workshop. The famous Fr. Reginald Foster would be there, and it was billed as a somewhat Catholic event. I loved Latin. I loved reading it, hearing it, and occasionally writing it. I wanted to speak it, but there were only dead ends. As a parish priest in the midwest, I was the best Latinist around, which wasn’t to say I was even that good, just that Latin wasn’t on anybody else’s radar.
I bit the bullet and bought the tickets. I even convinced my brother, living in Ohio at the time, to meet me there. I told myself at the time, “This is it. This is the Latin camp you always wanted to try. Now you will have gotten to do it once in your life.” It had been so hard to make room in the parish schedule to be gone even for a week, that I had to make a promise like that to myself, to give myself permission to indulge in something that seemed like a mere personal hobby, that no one around me cared about.
And then I went. And Veterum Sapientia blew me away. Of course I was shy. I’m very shy anyway, but the fear of speaking Latin for the first time made it much worse. Several times I forgot completely what I had said a few words in, butchered the sequence of tenses, and, naturally, didn’t know the words for the most basic items of ordinary use. It still blew me away. The non-judgmental, encouraging environment, and the pedagogy! My whole study of Latin had been the familiar grammar-translation method, with Jenney’s and Wheelock’s. Whatever else I had was inconsistent and on the side.
Most of all, at Veterum Sapientia that first time, I realized that there were other people in the universe who cared about this language. Maybe I wasn’t alone. Maybe I wasn’t so crazy. So I resolved that I would go each year, no matter what. That barring a true disaster, I would leave my parish and make the trip. One year that meant getting up at 1:00am for a flight. Other years it meant leaving a half-day early because I couldn’t get coverage for the weekend Masses. But, no matter what I had to do, I went. And so I have gone to the conference every year for now 8 complete years.
In that time, Veterum Sapientia has only gotten better–and more Catholic. I have become a committed Veterum Sapientia evangelist, and I have seen how helpful it can be. As the world of secular Latinity increases and Church Latin decreases, we need movements like this to reverse the trend. The addition of further workshops, the partnership with the seminary in Charlotte, and now the launch of the expanded Veterum Sapientia Institute, are all going to bear fruit for the Church of 2030, 2040, and beyond. The effective, friendly, Catholic learning environment that VSI creates is unmatched in the United States right now. To anyone who is on the fence about trying this out, I say Duc in altum! 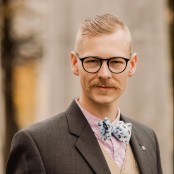 James Walther holds an associate's degree in theology from Holy Apostles College and Seminary. He was a seminarian for ten years (United States, Italy, France, and Belgium). During which time, he twice assisted at the Veterum Sapientia summer immersion programs. He also earned the Brevet d’Aptitude aux Fonctions d’Animateur (BAFA) from the French Ministry of Education and worked at a summer camp for boys in France for four summers. Then he served as a supervisor and customer relations manager for a private school in Brussels, Belgium. After leaving seminary, he re-enrolled at Holy Apostles College and Seminary, working towards a MA in Dogmatic Theology.
Search